Summer is officially here: School is out, the beach is “in”, but while many in Greater Washington begin to wind down for the season, the Catalogue team is just getting started with production of our 2015-2016 guide to giving!

After thoroughly vetting more 200 charity applicants in areas of financials, programs, and impact, last month we proudly announced our list of charities to be included in the upcoming Catalogue. So what happens until the November 1 release of the 2015-2016 Catalogue for Philanthropy? Read on to find out! 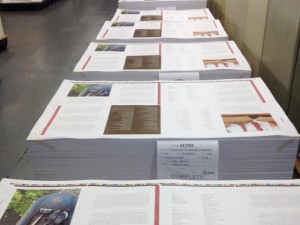 We begin by working with each of our charities to collect the very best photos they have of their programs or volunteers in action, or…anything that represents what they do. Fun fact: Nearly all of the beautiful photos in our Catalogue come from our charities (which is one of the many reasons we think the Catalogue is so special)!

While collecting photos, we also begin turning each charity’s 3000-word application into a compelling 170-word story that will represent that charity in the Catalogue. We convey, in a human voice, the need that a charity meets, the programs that are at the core of what they do, and the impact they have on the community. Most small nonprofits don’t have the communications staff to do this work for them, so telling their stories, in words and images, is what we do! After many round of proofing, we’re off to the printer, and then mailing center, where the Catalogue is mailed to more than 25,000 households across Greater Washington.

Of course, as we put together the Catalogue, we always want to ensure that we incorporate the feedback of our supporters in the community. Do you have 5 minutes to spare, and a desire to help make this next Catalogue our best one yet? Help us understand how you use the Catalogue and how we can improve our work in the future by filling out our user survey! Your feedback will influence the ways in which we make the Catalogue an even more valuable resource for donors and charities in Greater Washington.