Earlier this month, middle school students from John Hayden Johnson and Charles Hart took a field trip to the Deloitte office in Arlington, VA. This excursion was just one of many unique opportunities made possible by the After-School All-Stars Washington DC, a local charity that provides free after-school programs for low-income middle school students. The trip to Deloitte was part of the Career Exploration Opportunities Initiative, a program focused on exposing students to attainable and attractive career paths that they may not have been aware of, otherwise.

As the middle schoolers arrived at the Arlington office, they weren’t sure what to expect. They wanted to know, “What does it mean to be a consultant?” Because many of the students were (like most Americans) unfamiliar with Deloitte, they were eager to hear more about the company from the perspective of dedicated staff members. They were greeted by Maddie Devine, a Deloitte Business Technology Analyst who also graciously serves as the Event Lead for the After-School All-Stars. After a dinner provided by the company, students were given a full tour of the facility that included a breakdown of every department. Deloitte staff members spoke about their current projects, and the students were introduced to the newly renovated Deloitte Digital Studio.

The tour culminated in a group activity where students were split into teams and presented with a mock case study, in which they had the opportunity to play the role of ‘Deloitte consultant’ for a notable client: Coca-Cola. The student groups had impassioned dialogues, and then submitted proposals on how Coke might expand its reach in global markets. Then, the groups had the opportunity to pitch their ideas to a few Deloitte staffers. Ranging from athlete endorsements, door-to-door product delivery services, new flavors, and even Coke-sponsored disaster-relief shelters in the developing world, the students’ ideas were amazingly creative and comprehensive. This exercise was impactful: it encouraged the students to be resourceful, to think outside the box, and it served as a wonderful conceptualization of what it means to work for an organization like Deloitte. All at once, the group understood what it means to be a consultant!

After-School All-Stars DC is privileged to have Jared Townshend, a Deloitte staff member, as an advisory board member. Jared acts as the official sponsor for ASAS DC within Deloitte, and is the Managing Director for the company within the Government and Public Services team. Together with Maddie, Jared sent the All Stars off in style with parting gifts, courtesy of Deloitte. Staffers posed for a photo with the group, and passed out hot cocoa as students left. The ASAS DC partnership with Deloitte has been characterized by the warmth and hospitality the students experienced on their field trip, and it is greatly appreciated. 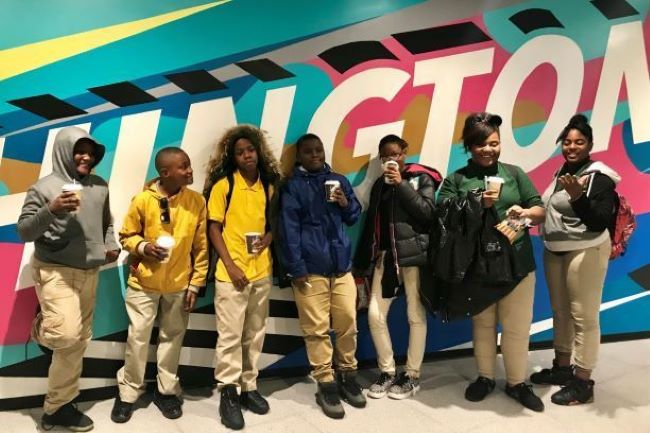 This trip to Deloitte exposed the All Star students to a career path worth aspiring to. The students left the office full of excitement, expressing admiration for the dynamic work that the consultants take on to meet client-needs. The students all saw themselves serving in similar roles in future careers, and said they’d be proud to work for the organization.

As always, ASAS DC will continue to provide these events to the students we serve. In this way, we will work to expand their worldview, increase their self-esteem, and help them understand the kind of success they are capable of achieving.