Free Tax Clinics for Families by the Mother’s Outreach Network

“Middle class, educated and White parents have been more likely to claim the Child Tax Credit (CTC) in the past than Hispanic families and those who did not graduate high school,” according to results from a national survey conducted by Ipsos last year as reported in the Washington Post. Through a temporary expansion of the CTC, eligible families can receive up to $3,600 for children under 6 and up to $3,000 for children ages 6-17. Yet, in DC, an analysis by the Social Policy Institute at Washington University in St. Louis shows that only 50.4% of eligible DC families received these payments.

Because tax season typically runs from January to April, it can be difficult for individuals and families who want assistance with their taxes to find free tax preparation services off-season. Mother’s Outreach Network, who launched tax workshops back in October of last year, is continuing to run tax clinics in partnership with the DC Public Library through September. Every Wednesday between 11 AM and 1 PM, they answer questions and give 1-on-1 advice at the Southwest Branch Library about the CTC, Earned Income Tax Credit, Stimulus Payment, and more — at completely no cost.

Melody Webb, Executive Director and Founder of the Mother’s Outreach Network, told Axios DC that “she often works with vulnerable mothers who may have misconceptions about the credit or be unaware of it altogether.” Research shows that while such government programs play a large role in lowering poverty, disparities in economic security persist.

As an organization that supports the economic empowerment of Black mothers fighting for their families’ economic stability, the efforts of the Mother’s Outreach Network to increase access to legal services like free tax preparation are critical to reducing these disparities. Because the process can be difficult or complicated, and because many are unfamiliar with the process of claiming these credits, their goal is to ensure that families feel supported and assisted in claiming the government money they’re eligible for.

“The biggest myth we’ve had to dispel,” Webb said, “is that people who are currently receiving safety net benefits aren’t actually eligible.” In fact, the vast majority of US families with children are eligible for the CTC, including people who don’t regularly file taxes. In addition to their Wednesday clinics, the Mother’s Outreach Network has also compiled a list of frequently asked questions about the CTC, available on their website. 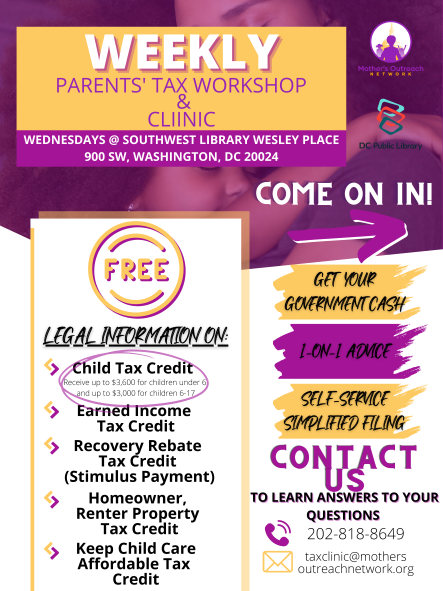