Summer is officially here: School is out, the beach is “in”, but while many in Greater Washington begin to wind down for the season, the Catalogue team is just getting started with production of our 2015-2016 guide to giving!

After thoroughly vetting more 200 charity applicants in areas of financials, programs, and impact, last month we proudly announced our list of charities to be included in the upcoming Catalogue. So what happens until the November 1 release of the 2015-2016 Catalogue for Philanthropy? Read on to find out!

We begin by working with each of our charities to collect the very best photos they have of their programs or volunteers in action, or…anything that represents what they do. Fun fact: Nearly all of the beautiful photos in our Catalogue come from our charities (which is one of the many reasons we think the Catalogue is so special)!

While collecting photos, we also begin turning each charity’s 3000-word application into a compelling 170-word story that will represent that charity in the Catalogue. We convey, in a human voice, the need that a charity meets, the programs that are at the core of what they do, and the impact they have on the community. Most small nonprofits don’t have the communications staff to do this work for them, so telling their stories, in words and images, is what we do! After many round of proofing, we’re off to the printer, and then mailing center, where the Catalogue is mailed to more than 25,000 households across Greater Washington.

Of course, as we put together the Catalogue, we always want to ensure that we incorporate the feedback of our supporters in the community. Do you have 5 minutes to spare, and a desire to help make this next Catalogue our best one yet? Help us understand how you use the Catalogue and how we can improve our work in the future by filling out our user survey! Your feedback will influence the ways in which we make the Catalogue an even more valuable resource for donors and charities in Greater Washington.

At the Catalogue, we LOVE hearing stories of inspiration and collaboration, and this week’s #whatsupwednesday gives us a glimpse into two organizations doing just that: DC SCORES and 2Seeds Network. Have a story of your own to share? Send it to us so we can feature you on our blog! In the meantime, read on to see what these great organizations were up to this week: 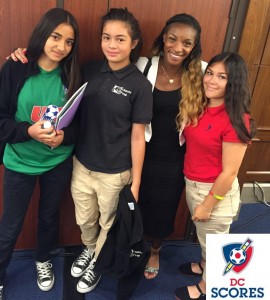 This week, DC SCORES student Nohemy (left) was on a panel about girls in sports with Washington Spirit star Crystal Dunn! Want to keep up with DC SCORES on social media? Follow them on Twitter or Facebook. 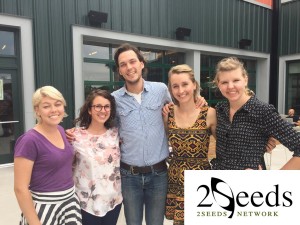 Today, 2Seeds Network’s US-based staff met with the team from 2 Seconds or Less (an organization dedicated to ending childhood malnutrition) to share ideas, lessons learned, and dreams of ways to make their organizations stronger and more effective. Want to keep up with 2Seeds Network on social media? Follow them on Twitter or Facebook.

Be sure to check out each of these organization’s nonprofit pages in the links above to find out how you can support them!

In this week’s edition of #WhatsUpWednesday, we have volunteer opportunities to uplift young girls, a recipe that is both delicious and nutritious, and snapshots of our nonprofits in action: celebrating the joy of reading in schools, ensuring the safety and health of those living on the street, and showing off agricultural achievements!

Girls on the Run – DC

Girls on the Run – DC relies on amazing volunteer coaches to help our teams of 8-15 girls recognize their inner strength! Apply today to be a GOTR-DC Fall 2015 coach!

Gunther and Dr. Crosland from Unity Health Care Inc. were doing street outreach and bringing healthcare to people who live on the street. Whether it’s 10 degrees or 100 degrees, they are out there making sure people are okay!

Reading Partners DC
Reading Partners celebrated reading and the end of the school year, and took a great picture from Wheatley Education Campus (see that photo in the video above!).

Ever curious about what Catalogue nonprofits are doing each week? “What’s Up Wednesday” gives you peek into the inspiring work of some of the hardest-working organizations in Greater Washington. Click the image below to check out our video, and read on to learn more about the organizations it features!

Girls on the Run – DC
Girls on the Run – DC is honored to be participating in Do More 24 this week,a 24-hour online giving campaign to encourage the community to give where you live to inspire change in the region. We have a goal of $5,000 to provide program scholarships to girls in need so that they can learn to be joyful, healthy, and confident and become the best version of themselves! You can help by making a gift online athttps://www.domore24.org/#npo/girls-on-the-run-dc or by attending one of our events:http://www.gotrdc.org/event/1240/do-more-24-2015.

Arlington Partnership for Affordable Housing
This weekend, volunteers from Rock Spring Congregational United Church of Christ volunteered at our Arna Valley View Apartments, helping with projects such as gardening, litter clean up of a nearby park, and backpack assembly for our school supply drive. We also honored long-time affordable housing advocate Charlie Rinker with a tree dedication ceremony. Photo credit in this week’s slideshow: Michael Salamone.

DC SCORES is also participating in Do More 24 tomorrow, June 4th. Give the gift of a soccer uniform with a $24 donation!

Washington Parks & People
This has been a big week for Washington Parks & People, as they lay the groundwork (literally) for their new South Garden at the Josephine Butler Parks Center. On Monday, staff and DC Green Corps trainees braved the heat and humidity to lay down 15 cubic yards of topsoil. (That’s a lot of dirt!) The following day, they installed a carpet of rich sod, which will be so much nicer than the sweltering parking lot that preceded it!