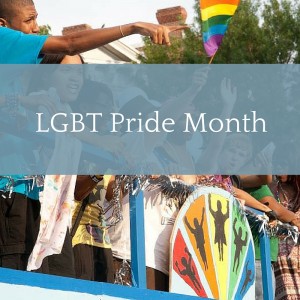 On May 31st, President Obama issued a Presidential Proclamation for LGBT Pride Month. The proclamation acknowledges the ongoing “fight for dignity and equality for lesbian, gay, bisexual, and transgender (LGBT) people” by forward-thinking individuals and the opportunity to “recognize all they have done to bring us to this point” during LGBT Pride Month. Pride month coincides with the anniversary of the famous Stonewall Riots that occurred in 1969 in New York City, which marked the beginning of the LGBTQ rights movement in the U.S.

This Saturday, June 11 is Capital Pride Parade. The Parade — which travels through Dupont Circle and Logan Circle neighborhoods — will include more than 180 floats, vehicles, walkers, entertainment. In light of LGBT Pride Month, and the upcoming parade, we’re proud to introduce our supporters to two Catalogue nonprofits that dedicate their missions to serving the LGBT community in Greater Washington:

- Allen Ginsberg, acclaimed Pulitzer-winning poet, would have turned 87 today. Throughout his time as one of the leading poets of the Beat Generation, Ginsberg tirelessly crusaded for peace and equal rights, from his nonviolent protests against the Vietnam War to his eloquent defenses of both LGBTQ rights and the freedom of speech. He was a practicing Buddhist and dedicated his life to educating and freeing the victims of imperialism worldwide. A controversial but extraordinary figure, we honor his contribution to human rights today.

14 percent of VA children live in poverty (WTOP): “The percentage of Virginia children living in poverty in 2010 was at its highest rate since 1998, an anti-poverty group reported Tuesday. The total number of children living in poverty totals nearly 265,000, or 14 percent of children under 18 in the state, Voices for Virginia’s Children said in a report to be presented to the General Assembly. While well below the US rate, the number in Virginia has increased steadily since the start of the economic downturn in 2007, when it was 12.9 percent, according to the report. In raw numbers, an additional 33,000 children are living in poverty.” You can learn more about Catalogue’s Children, Youth, and Families non-profits right here, twelve of which are based in Virginia.

In Maryland, a prescription for better health care (Washington Post Local): “Maryland is near the top of the national rankings in median household income, but the state’s great wealth does not equal good health for everyone. Instead, the state has troubling clusters of chronic disease, low-birth-weight babies and limited access to health care for those who lack the means to pay. Areas with large minority populations, including Prince George’s County, are especially hard-hit.” A new proposal, unveiled by Lt. Gov. Anthony Brown, “urges lawmakers to create health-care zones, which would mimic economic-enterprise zones” and state and local governments offer tax incentives for medical professionals who establish practices in underserved areas. It also would monetary awards for communities or nonprofits that find innovative ways to improve the overall health of a community.
END_OF_DOCUMENT_TOKEN_TO_BE_REPLACED

Nation’s report card: Kids showing a bit of improvement in math, but many still not proficient (Washington Post Local): “The nation’s report card on math and reading shows fourth- and eighth-graders scoring their best ever in math and eighth graders making some progress in reading. But the results released Tuesday are a stark reminder of just how far the nation’s school kids are from achieving the No Child Left Behind law’s goal [...] Just a little more than one-third of the students were proficient or higher in reading. In math, 40 percent of the fourth-graders and 35 percent of the eighth-graders had reached that level.” According to the article, Maryland students in both grades showed reading improvement; according to WAMU, “Virginia’s scores in reading and mathematics remain higher than nationwide averages.”

END_OF_DOCUMENT_TOKEN_TO_BE_REPLACED

Preview: 2011 Capital Fringe Festival (DCist): “The Capital Fringe Festival starts its sixth year this Thursday with over one hundred productions being performed at venues all over the city. Fringe is an opportunity for actors and production companies to get a moment in the limelight — whether they’re unknowns or big players doing some experimenting — and for arts-goers to see lots of theater for relatively little money.” Not sure where to start with your arts-going? Capital Fringe’s website has a great tool for searching all shows by location, date, time, and genre. (Among others, Catalogue-nonprofits CHAW and Woolly Mammoth are serving as Fringe venues these next few weeks!)